WhatsApp’s Polling Feature Has Been Launched

WhatsApp’s Polling Feature Has Been Launched

WhatsApp, the most popular instant messaging app as well as a voice-over-IP application, is constantly introducing new features to make its users’ lives easier and more comfortable. Recently, WhatsApp launched the most-awaited “poll” feature on Android as well as iOS. 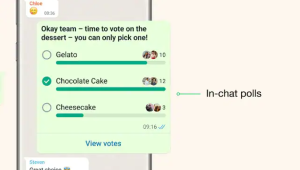 The poll option has become a popular feature on social media for quickly learning the opinion or judgement of its audience on a specific topic. Social media platforms like Instagram, Facebook, Twitter, Telegram, and YouTube have already launched the feature. Currently, the poll option is available on mobile versions only, and the reports that came out indicate that the feature will be included on WhatsApp Web soon. So, ensure that your WhatsApp has been updated. The poll option can be enabled in individual chat as well as in group chat. In groups, not only admins but every member can create a poll, which can include up to 12 options. WhatsApp will alert you if you add the same option again by mistake.

How to create a poll on WhatsApp:

A WhatsApp poll allows participants to vote for more than one option. The poll option will be useful, especially in groups, if there is a need to know the opinion of participants on a particular issue. By tapping “view votes,” you can view the details regarding the poll, including who has taken it and which option they chose.

What is meant by Keyword mapping?
Simone